Is a Dystopian Future Inevitable?

It’s a crushing thought. Entertainment arts have been flooded in recent years with dystopia. I know a number of people who are writing dystopian novels, especially for young adults. It has been trending and selling for some time now. What is behind this trend? Is it hopelessness? Maybe people are obsessed with exploring their fears— if they talk about them, perhaps they won’t happen. Or it could be merely a new playground for our imaginations, giving us plenty of opportunities to test our human strengths against new and scary scenarios. Sometimes I’m right there with these writers, with my love of stories of apocalyptic proportions, but I differ a little from this rampant dystopia.

Merriam-Webster’s definition:  1: an imaginary place which is depressingly wretched and whose people lead a fearful existence.

A wasteland of our own making

Now to me that sounds frighteningly unappealing. Who would want to live in such a scenario? I can’t imagine any human beings in their right minds who would desire such a world unless they had personal death wishes, or were completely disillusioned by people and desired revenge on humanity. But perhaps there is something else.

Obsessed by our Fears

I am no different than many in taking a rather dim view of the future based on the rampant crime and evil acts we see and hear about all over the world. But when has this ever been any different? Each generation has had challenges that shook it to its core. The Doomsday Clock has been around since before many of us were born. Initially it signified the distance to doomsday due to nuclear weapon proliferation. Now our doomsday fears include climate change, nuclear waste disposal, and other messes. The clock currently stands at three minutes until midnight. The last time it was this close was in the early 1980s.

As I drove through town today I looked around at the houses people live in. A majority of the inhabitants must be somewhat decent people with the same desires for living a decent life that I feel. Why can we not, as a species, rise above our undesirable traits?

The Search for Utopian Stories

I searched the web for lists of books or movies that had non-dystopian depictions of the future. What I found was quite surprising. The only one that came close to what I wanted was Star Trek. 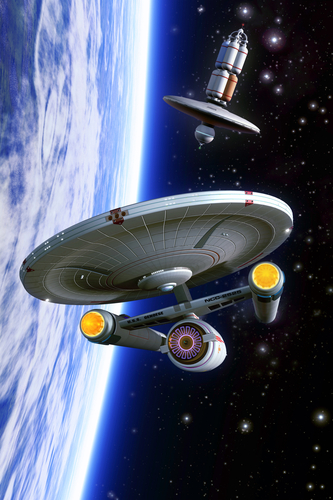 The newest Star Trek movie did not disappoint, either. A few others were listed, such as I, Robot and AI. But beyond those few, most of the others labeled “utopian” were actually dystopian utopias. By this I mean that humankind had achieved a more-or-less peaceful existence, yet by undesirable means and with undesirable controls. This list of 25 books will give you a good idea of what I mean. The first two on the list are Brave New World and 1984. And that was it. I thought, “What gives?” So I asked myself the question. Do I personally believe we have a chance at a peaceful, problem-solved future?

My ability to see all sides of an argument gives me a stake in each of these perspectives. Optimistically, I believe the human race is fully capable of rising to the challenge of any problem the world can produce. After all, look at history. One can clearly see the resilience of humans in the face of every kind of threat. Realistically, we know that humans do not always respond to threats with peaceful actions. Immerse humans in enough violence, and they will often react similarly; first as a matter of their own survival, then out of a sense of anger or hopelessness. Pessimistically, I can see the selfish greed and debasement of humanity as its ultimate undoing. It certainly seems to be moving in that direction. But is it?

The Bees Have a Secret

We took on a new hobby about four years ago—beekeeping. I love my bees. They are fascinating to watch. When I open the hive I stop and sense the hive atmosphere. I swear I can tell whether they are happy or stressed. They exude a happy hum when they are busy and productive, when their queen is doing well and they are doing what they are meant to do. When the queen is gone or they are upset at my intrusion, the hum of the hive is gone and the bees are riled up, or in a state of confusion. Recently I noticed that the bees from only one of our hives flew at me, banging angrily, recklessly, into my bee hood. Later, I realized this was the hive that had an invasion of ants. Makes sense now.

We caught our first swarm this year. Bees swarm when they feel the need to propagate themselves. About 60% of the bees, along with the old queen, leave the hive. They settle on a branch somewhere not far from their old home, and send out scout bees to find them a new one. They form a tight cluster, all surrounding and protecting the queen in the center. When the new home is chosen, the bees fly to it together and take up residence. A few bees may be lost along the way, but as a whole they have successfully navigated the dangers of change by supporting and protecting their species as a whole. You might say they helped and protected each other. The bees who were left behind somehow sensed the imminent change, and had already begun the process of raising a new queen from the larvae left by their predecessor.

Is there a parallel here? If so, it might be that the human race is happiest when engaged in productive, outcome-based work that benefits those around them or society as a whole. Threaten that too much, and we will fight for the right to survive.

The imagination of sci-fi authors, from H. G. Wells, b. 1866, author of The Time Machine, to Andy Weir, b. 1972, author of The Martian, have stimulated my own mind to imagine places and scenarios based in reality, though often far-fetched. I prefer not to leave reality behind completely and escape into fantasies, as I find it fascinating to imagine concrete worlds and settings with at least a smidgen of realism, and to ponder how humans would react to more-or-less realistic future scenarios

Many think Star Trek got some of it right, but not all. Our future, if we extrapolate outward from what will soon be possible, includes things such as human enhancement and life extension. But I like to think that humankind will be…well…kind. Like the Star Trek characters. Well mannered. Intelligent. Caring and cultured. Mature and responsible.

We rented a sci-fi series disc from Netflix recently. The people of Earth, Mars, and Ceres (a dwarf planet in the asteroid belt) were on the verge of a galactic war. The characters in the show had no more maturity and civility than what I see in the world today. I was sharply disappointed in the show; although it did have some interesting futuristic aspects and seemed to be well made, most of the people were jerks. Because of this, I didn’t enjoy it. When will we learn?

If thousands of years of existence—from the first humans who fought over ownership of territory, goods, and people; to today’s global world, where the same things are still occurring; and into the future, where the fighting will be over galactic conquest and resources in space—what can possibly solve our internal sickness? Why can’t we simply be like the bees?

Psychology tells us that when faced with a threat, people tend to 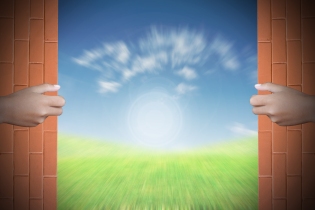 A Bright Future: Is it Attainable?

band together to fight it. We saw this happen during WWII and other threats to humanity. Too bad we can’t live like this every day. We love movies like Independence Day and Armageddon. Far be it from me to wish these things on us, but sometimes I do feel we need a reset to our self-centered existences. I have read that science fiction is falling out of favor, while fantasy has been exploding. Why might this be? Do we gravitate toward escapism when our world becomes too messy?

I do have great faith in mankind’s abilities to learn and grow, to solve problems and exhibit truly magnificent ingenuity. We are the most fantastical of beings but can also be the lowest and most debased of creatures. Maybe it takes more strength than what we can generate and maintain from within ourselves. Maybe we need more than physical healing; maybe we need healing of our souls. Could we be better people if we were to live with a daily awareness of our own “soul sickness” and seek help from a higher power?

I resist becoming jaded toward humankind. There is much that is good, and there is a way forward. There is a redeemer of human lives, and we see daily evidence of good on an individual level. That may be the best place to focus, rather than on our distress over our future.

No doubt we have more growing pains ahead, but I strive to reflect my hope and belief in the good, in the possible, in healing, and in a future path that weaves its way through dystopia and breaks out into the light.